Inspiring Story: Bai Fang Li: A Rickshaw Operator Who Gave Much To Orphans

Often times, we think that many educators gave their all, with much passion and sacrifice to help educate our students for the better. But there are others too, who sacrificially gave beyond what was necessary to help orphans have a brighter future.

Well, here is an inspiring and touching true account of a rickshaw rider who was changed by an incident that he witnessed and decided to do something about it eventhough he was getting on in age and was only a lowly rickshaw operator.

He knew there were young people who were in a worse situation than him and he did something positive in his own little way. When he died, he was remembered for his kind, selfless deeds for the orphans so that they too could go to school and live a better life than he did.

Bai Fang Li: A Rickshaw Operator Who Gave Much To Orphans 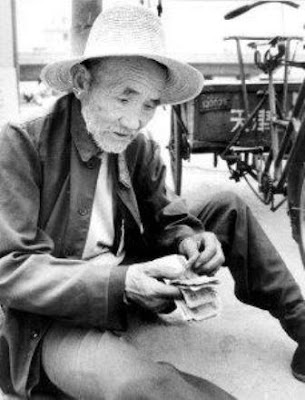 His name is BAI FANG LI. He is a rickshaw operator most of his life, providing services to people who need to go from one place to another for a small fee.

His body is small, even too small compared to the other rickshaw operators. However, he is very energetic and enthusiastic. He starts his routine at 6 am in fellowship with his God. He then cruises the streets of the city on his rickshaw, either to get a customer or to bring the customers to their destination. He ends his day after the hard work, no sooner than 8 pm.

All his customers like Bai Fang Li because he is friendly, and his smile never leaves his face. He never determine the fee that his customers must pay, but he relies on the customers' generosity to pay for his services. Because of his good heart, more people prefer to use his services more than others. Perhaps because of their compassion to him, many are willing to pay more than the going rate that most rickshaw operators charge. Maybe this is because they see how hard he, with his small body sweating, has to push till his breathing is heavy. 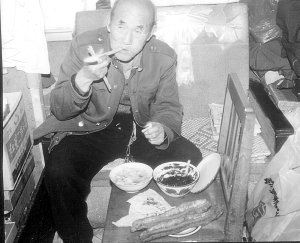 Bai Fang Li lives in an old and rusty hut in a slum area of the city where many rickshaw operators and garbage collectors live. He rents a portion of the hut and pays daily for a place to sleep. There is practically no furniture in the hut, except for an old rug to sleep on after a very long and hard day at work. There is only one room under the roof to share with several other people. In this room, he often received visitors who come to get help from him. Inside the room, there is also an old cardboard box where he store an old, badly torn and stitched blanket. There is also a tin plate, which he probably found in the pile of garbage around the hut, for him to eat, and a tin can for him to drink. At the corner of the hut, there is an oil lamp to give light to the room at night.

Bai Fang Li has no family or relatives. People just know that he comes from another place. However, he never feel lonely because he is always surrounded by people who love his company. They love him for his positive attitude and his generosity. He helps everybody who need help, and he does it with joy in his heart and without expecting anything in return.

From what he earns, he should be able to afford better food and clothes. However, he donated most of his earnings to an unknown orphanage that takes care of over 300 orphans in Tianjin. This orphanage also runs a school for the orphans and other poor children in the area.

An incident that change his way of life 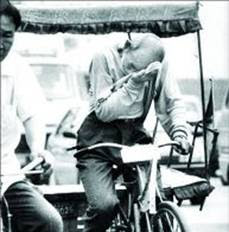 Bai Fang Li started giving to the orphanage at the age of 74. This is the story how his heart was touched and how he made the decision to do what he did.

One day he was resting after dropping off a customer. He saw a tiny and skinny six year old boy on the street offering his service to an older lady to carry her groceries that she bought from a nearby market. He saw this little boy carrying the heavy grocery bags with a lot of struggle, but he was determined to do the job well. There was a big smile on the boy's face when had completed the duty and receive some loose change from the lady for his service. This boy looked up the sky mumbling something as if he was thanking God for the blessing that he has just receive. Bai watched the boy doing it to several ladies who were shopping in the market, and every time he received payment for his services, he would looked up to the sky and mumbled something.

Later, he saw the boy going to a pile of garbage and digging into the garbage looking for something. When he found a dirty piece of bread, he was so happy. He cleaned the bread the best he could, and put the bread in his mouth and enjoyed it as if it were a piece of bread from heaven. Bai's heart was so touched by what he saw. He approached the boy and offered to share his lunch with him. Bai was wondering why the boy did not buy a decent lunch with the money he earned from providing services to the ladies. The boy said, "I will use the money to buy food for my siblings." Bai asked, "Where are your parents?" The boy replied, "My parents were separating stuff from garbage everyday. However, one month ago, they disappeared and I have never seen them again. Thus, I have to work to feed myself and my two younger sisters."

Bai Fang Li asked the boy to take him to his sisters. Bai's heart was crying when he saw the two girls, 5 and 4 years old. The girls were dirty and skinny, and their clothes were very dirty. The neighbours did not care about the condition of these three children because they too were struggling to cope with their own lives.

Bai Fang Li took these three children to an orphanage in Tianjin. He told the manager of the orphanage that he would bring the money he made and give it to the orphanage to help the children there to get food, care and education. Since then Bai Fang Li decided to work harder and with more determination in operating the rickshaw to earn money for the orphanage. He started early and finished late to get the extra money. From all his earnings everyday, he put aside some money to pay the rent for his living space in the hut, to buy two raisin bread for his lunch and a small piece of meat and egg for his dinner. The rest of the income was donated to the orphanage to help them feed and care for the children.

He is very happy doing all these things, despite his limitations. He felt that it was a luxury that he had a place to live, food to eat and clothes to wear, eventhough the clothes he got from a garbage disposal. He was always thankful for what he had.

Bai Fang Li worked as a rickshaw operator 365 days a year, regardless of the weather, and often when it was snowing or when the sun was very strong and hot. When asked why he would sacrifice so much for these children, he always said, "It is OK that I suffer, as long as the poor children have something to eat and that they can have a proper education. I am happy just to do all these things."

Giving Without Expecting Anything in Return


Bai Fang Li started donating to the orphanage since 1986. He has never asked anything in return from the orphanage. He does not even know which children benefitted from his donations. For the next 20 years, Bai Fang Li operated his rickshaw for one purpose: to be able to give donations to the orphanage in Tianjin. At the age of 90, he brought all of his savings of about RMB500 (about US$80) that he has stored neatly in a box to the school named Yao Hua that was run by the orphanage.

Bai Fang Li said in a sad voice, "I am too old and weak to operate rickshaw now. I cannot continue with the donations. This could be my last donation.." All the teachers in the school were touched and cried. When Bai Fang Li died at the age of 93, he died in poverty. Despite of that, he had donated RMB 350,000 (about US$53,000) to the orphanage and the school that was run by the orphanage.

If a poor person gives out of his lack, he is an heir of heaven. He has been sent to this world to teach us to be continually thankful and to give to others who are in need.